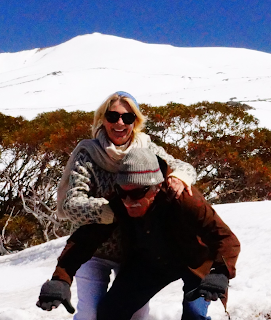 Coverley acting the pro-skier I cared for Coverley at home for 5 years before he went into an Aged Care Facility under difficult and tragic circumstances . He was initially diagnosed with mixed Vascular Dementia and Alzheimer's Disease.  Before going into his Aged Care Facility he spent a traumatic 18 weeks in Lismore Base Hospital where his dementia diagnosis was changed to Lewy Body Dementia based on his severe sensitivities to anti-psychotic medications.  He has been in his current Aged Care Facility for 18 months. It has been a trying time for medical staff to get his behaviours associated with his dementia manageable. During this time he has been tormented with hallucinations, delusions and paranoia. He has suffered relentlessly and greatly.  Snow deep fun  In his calmer moments, despite his confusion and suffering, he has maintained his humour, his thoughtfulness and his impeccable manners. At times he is still able to express his concern and love for myself and others. I hav
Post a Comment
Read more